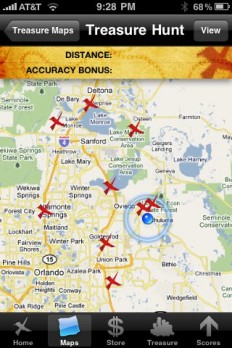 Location-based games have had a number of notable titles over the years, as designers and developers have tried to gamify locations, or localize games, or whichever approach they feel like taking. While there are some notable exceptions, of course, the majority of these titles tend to follow this pattern:

From Shadow Cities to Merchant Kingdom to QONQR, the ostensible goal of the game is to take “ownership” of the locations around you – but what does this ownership mean? The implication, of course, is that if you own it, nobody else can. Either you’ve managed to defend it from other players, or you’ve dethroned the prior owner; therein lies the competition and the drive to keep playing.

I have the good fortune to live in a heavily populated metropolis, which typically provides me with a good roster of opponents. If there’s a location-based MMO out there, there’s a fairly good chance this is one of the places that people are playing it. This is not true everywhere else, though, and leads to one of the challenges facing games of the genre. Simply put, in the scenario described above, the other players in the game are responsible for the challenge; they are the in-game content. In a location with few players, there’s simply less to do. I enjoyed my struggle in Merchant Kingdom to carve out my rightful rank as Count of San Francisco; I felt a little less enthusiastic about claiming control of Clear Creek, Colorado with a single action.

This leads location-based games to a tricky chicken/egg conundrum. To retain a new player, the game needs to have a substantial base of existing players… but to build a substantial playerbase, the game needs to retain new players. It is here where the game’s design will help elevate it from another generic “foursquare clone with mafia trappings” to a worthy entry of the genre, and there are some key concepts that can help make this happen.

Even if your game design calls for players to generate content for one another – whether it’s as opponents, or by leaving tagged locations around the world for others to find (i.e. geocaching), there is a lot to be gained by “seeding” your world with prefabricated content. One of my first dalliances with location gaming was Traveler’s Quest, a geocache-style game that involves tracking down virtual treasure hidden in the world by other players. When I first installed the game, however, I happened to be in a far less populous area than usual, with no other players having left treasure within several miles. If the game had presented me with a blank map, or told me the nearest treasure was some 15 miles away, I would have very likely uninstalled the game that same day.

Instead, Traveler’s Quest cleverly generated a new treasure into the game, just far enough from my starting location that I’d have to leave my current location and walk two blocks to get it. In one move, the game had demonstrated its basic gameplay to me, and then immediately taught me how to earn rewards for my find. Traveler’s Quest also regularly seeds the immediate area with new treasure every time you advance sufficiently, ensuring that there isn’t a fixed amount of items for players to fight over. This helps keep it from stagnating as players go idle and stop hiding treasures, or greedily hoard their finds.

2. Tie the Biggest Rewards to Creating Content for Others

For most location games, this step is a no-brainer, but it bears repeating. Generally, interacting with existing content takes less effort than creating new content, and some players may never bother with the latter. Many location-based games sidestep this issue simply by having players reap rewards for their owned locations, FarmVille-style: pick a spot, build a base, and collect points or resources after regular intervals. In this case, more bases equals more loot, so players are encouraged to roam around and plant more flags. More bases created means more spots where new players can see potential targets to attack, and so on.

Merchant Kingdom incentivizes this process by design, generating a pre-arranged map of in-game resources atop the real world, and requiring a diverse collection of those resources to advance. Player ranking is determined by a kingdom’s population, and to build more housing, a player needs to collect lumber, stone, metal, and food – but any given location can only produce one of those types, forcing players to explore the world and put up a far-reaching collection of settlements. At the advanced level, specialized rewards such as weaponry and armor require specific kinds of lumber and metal – and those are differentiated by real-world counties. Assembling my in-game SF army required me to go across the bay and set up shop in Alameda, thus providing East Bay players with new content.

Similarly, this is the core design of Traveler’s Quest: A treasure is worth a small amount when it sits in your inventory, but if you hide it out in the world, leaving it vulnerable to theft by others, it starts to generate daily rewards, thus driving players to go populate the area with little red “X” marks.

3. Content Creation Should be a Fun, Natural Process of Playing Your Game

I have to give special mention to CodeRunner for the way it seamlessly tasks players with seeding content as a basic component of its core single-player campaign. Finding a location-based game that even has a single-player campaign is a rarity in and of itself, but that’s beside the point. In a stroke of brilliance, when a player has completed CodeRunner’s engaging story mode, they will have left a swath of user-generated content in their wake that future players can enjoy.

It works like this: the in-game story tasks players with using their phone to “hack” into nearby computer networks to follow a trail of corruption and espionage, breaking in through common urban features like security cameras and electrical boxes. So, for example, during the story, the player’s “target” receives a payout, and the omniscient voice asks the player to help trace the transfer by hacking into the bank via the nearest ATM. If one is playing CodeRunner in an area full of other players, there’s a good chance someone has already created one of the game’s “Dead Drops” and attached a clue to a nearby ATM. If not, the player is simply able to tag the closest ATM and generate a drop of their own – which is now added to the game world for all future players.

By providing players with an engaging and motivating campaign, CodeRunner tricks players into seeding content whether they care about other players or not, and that’s genius.

Whether it’s through designer-curated content, clever design, or active community support, a location-based game needs a healthy community and opportunities for regular interaction in order to reach critical mass – and then keep it. Nobody wants to be ruler of a ghost town, or offer a challenge that nobody ever accepts.

CodeRunner is published by RocketChicken Interactive, previously a TriplePoint client. Originally posted on Frisky Mongoose, a TriplePoint-sponsored blog about social, mobile, and location-based apps and games.