There’s no doubt that wearable technology has gained widespread acceptance among fitness and health enthusiasts. The simple bracelets track our movement and encourage us to live a more fit lifestyle, a goal most of us aspire to but struggle with when it comes to ongoing engagement. Companies like Nike and Fitbit are making major headway into this category, while other technology giants jump in to tackle the next evolution of wearable tech with the smartwatch.

Yet, skepticism remains about the viability of such devices and their impact on our lives. Is it a necessity? What form will it take before gaining mainstream acceptance? When will form meet function and design before we’re all genuinely excited about it?

I believe that there’s a massive opportunity with wearables, particularly the smartwatch, as devices that will become just as ubiquitous as the smartphone, if not outright replacements. Let’s take a look at some of the players and trends pointing the way.

Apple
I recognize it’s strange to lead off with a company that has yet to reveal a smartwatch. Yet, the rumor mill continues to swirl about the company’s plan. The most interesting rumors involve a secret army of engineers working on a “special project” (the TV could be another), and motion sensor “system on chip” manufacturer Invensense tripling its company size to accommodate orders from Apple.

We should also recognize that Apple does a fantastic job of incorporating accessibility and assistive technology into its devices, many features of which will overlap with an advanced UI necessary for tackling problems with smartwatch usability.

The market is also still ripe for innovation when it comes to both form and function. Nailing the look and usability of such a technology is no easy feat, but that’s a challenge that Apple has repeatedly shown to excel at with the personal computer, MP3 player, smartphone, tablet, etc.

Here are a few interesting concepts:

Additionally, Tim Cook sits on the board of Nike and can often be seen wearing a Nike+ FuelBand. He’s a strong and vocal proponent of the FuelBand. You can count Cook among those who believe in the future of wearables, with Nike as the perfect testing ground for his own company’s aspirations and fueling speculation of Apple’s plans in this category even further.

Google
Probably one of the more exciting news in wearable technology of late is Google’s announcement of the Android Wear OS. 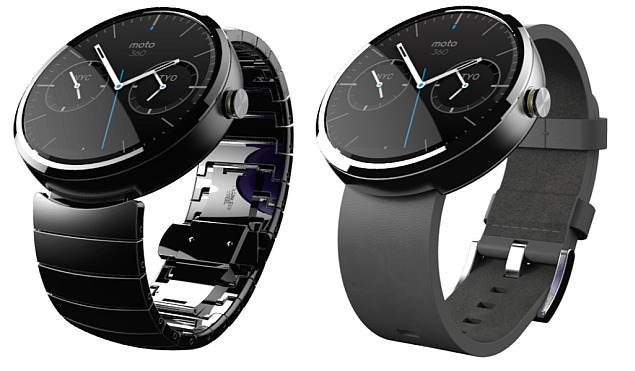 Not only are the initial Motorola 360 and other designs revealed with the announcement a great step in the right direction to making an attractive product, but the attention to solving UI challenges should add fuel to the race. With Android continuing to build momentum in the smartphone and tablet space, Wear is a testament to Google’s commitment in the smartwatch category and an important sign that this isn’t going away.

And in case you’re wondering, no, I don’t believe in the future viability of Google Glass, primarily because of its intrusive nature that will never gain social acceptance.

Samsung, Pebble, and others

Pebble is the most notable company to enter this space with a splash, setting the tone for how smartwatch design married with tech can get tech enthusiasts excited. Its move to deploy an SDK and a discovery portal (an Android app containing a library of compatible Pebble apps) is a smart one, which should accelerate developer adoption of the platform as it continues to expand its install base.

Samsung is another major player taking this space seriously, coming out with its own Galaxy Smartwatch line. Most recently, the company revealed a whole slew of new designs at Mobile World Congress in Barcelona, the Gear Fit receiving the most recognition of the bunch due to its curved screen and attractive look. While Samsung continues to contribute great effort to this space, it’s still not quite enough to solidify the smartwatch as a must-have gadget.

So what’s needed to cross the chasm from tech enthusiasts to mainstream acceptance? What can we expect?

We need to completely change the notion of a smartwatch as an accessory to the smartphone, but a piece of technology that is convenient to use and solves common problems in our everyday lives. We once thought that feature phones were an amazing piece of technology that couldn’t possibly get any better, until color screens with web browsing capabilities, improved data bandwidth, and eventually the iPhone came along to change our perception of cellular phones and becoming a necessity, not a “want.”

I’m personally not satisfied with having to carry an $800 electronic brick in my pocket, and I imagine my 3 year old daughter growing up and wondering in disbelief that we’d use it as the central communications tool. Let’s look at three key areas that have yet to truly materialize — areas of focus that will drive the future of smartwatch adoption and utility.

Many events and meetups are sprouting up around the world to discuss topics in wearable technology, which speaks to the real momentum behind the technological movement. I believe it’s going to be just as big, if not more important than, the advent of smartphones and impact our lives in nearly every way imaginable, from fitness to health and just everyday utility.

One such event is being put on by ReadWrite, coming up in San Francisco on April 9th – ReadWriteMix: Grappling With the Future of Wearable Technology with Pebble’s Eric Migicovsky.

View more information about the event and RSVP for free here: https://www.eventbrite.com/e/readwritemix-grappling-with-the-future-of-wearable-technology-with-pebbles-eric-migicovsky-tickets-10981442791

It’s sure to provide more insight on this hot topic, and I’m looking forward to participating in the discussion. Look out for me there, or reach out in advance to make sure we connect!