Pushers–Why Titanfall will not save the Xbone (yet) 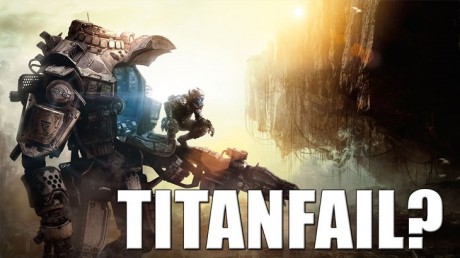 Titanfall launched a couple of weeks ago, and the reviews are very good. The game has an 86 on Metacritic, which reflects (if nothing else) a unanimously positive response from the aggregated gaming media, and players are raving about how great the game is. I myself participated in the Beta test for Titanfall on PC, and found the game fast-paced, intense, and generally fun to play.

But it won’t sell Xbox Ones. Not yet.

Microsoft execs, including Chief Marketing Officer Yusuf Mehdi, have clearly put their hopes on giant robots. Mehdi told Bloomberg Businessweek, “it’s hard to overstate the importance of Titanfall to the Xbox One release this year. For us, it’s a game changer. It’s a system seller.”

Which is funny, because games felt like the last thing that Microsoft wanted to sell systems with last year. The much maligned Xbox One Reveal in May of 2013 left a bad taste in people’s mouths for lots of reasons, but a complete lack of games was chief among them. As Forbes said at the time, “we saw lots of stuff about TV and the entertainment ecosystem the company hopes to provide, but very little about the games themselves (and the ones we did see were cross-platform.)” Even after the backlash, the first North American ad for the Xbox One included no videogames at all.

It’s not unusual for a company to reverse its course to tackle new markets or come back to greener pastures. But Microsoft’s charge towards a comprehensive home entertainment system at the expense of focusing on games means that their current catalog does not justify purchasing an Xbox, even with Titanfall.

Jim Sterling’s Jimquisition made part of this argument last week. He points to PlayStation’s support of Indie games as “console justifiers”, and the reason that Playstation 4 is killing the Xbox One in the early stages of the next-gen console wars. A strong portfolio of shorter, cheaper, and high quality indie games helps hold interest in Playstation in the lead up to AAA releases, making it easier for one game to justify purchasing a whole console (particularly when that game can be as good as InFamous: Second Son).

By trying to focus on things other than games, Microsoft may have crippled its ability to build a strong foundation of games that can support its AAA releases. Titanfall is a great game, but it cannot make up for the total lack of any other meaningful releases on Xbox. Combine with that the fact that Titanfall is not a console exclusive (Titanfall is available on PC), and there are even fewer reasons to spend $500 on an Xbox One to play one game.

Titanfall is a very fun game that may yet end up as a cornerstone of Xbox’s games lineup. But that lineup does not yet exist, and until it does Xbox One’s will remain on the shelves and not in living rooms.