Idomeneus stabbed Erymas in the mouth with the pitiless bronze. The bronze spear passed right through and up under the brain, smashing the white bones. His teeth were knocked out and both his eyes flooded with blood: wide-mouthed he spurted a well of blood through nostrils and mouth: and the black cloud of death covered him over. [i]

In the 8th century B.C., violent video games were the lyre and voice of a blind man called Homer. His narratives were also widely available for consumption by children.

In my 8th grade classroom, my classics teacher told my classmates and I to prepare for the graphic details of Homer’s The Iliad. We were told that Homer believed depicting violence in media served to cleanse the soul, removing violent intentions, not creating them. He even believed that reciting his epic poetry of the brutality of war would disturb listeners enough to prevent them from wanting to go to war.

Most recently, controversy erupted when players discovered Grand Theft Auto V’s torture scene, where the player is required to input commands to torture an NPC. Was Rockstar’s intention to disturb players with that scene? If so, would players who completed the mission be less likely to want to torture in real life due to the feelings they experienced playing through it?

Regardless, the popularity of billion-dollar franchises like Call of Duty and Grand Theft Auto has of course led much of the non-video gaming public to believe that widespread consumption of such media is, in fact, making society more violent. On the other hand, an interview between video game journalist Todd Kenreck and psychiatrist Dr. Tyler Black of the British Columbia Children’s Hospital presents another view: that the rise in violence has been skewed by the amount of media coverage it gets, and that violent crime is at a 20-year low.

Mr. Carey presents findings from various scientists’ research, including that of Michael R. Ward of the University of Texas, Arlington. Dr. Ward examined week-by-week sales data for violent video games across a wide range of communities in the United States and Europe. Dr. Ward and his colleagues, in fact, discovered a new trend: surges in violent video game sales led to a decrease in crime, especially violent crime. 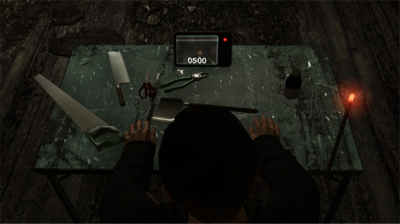 Coincidence? The findings of Kimberly Wallace of Game Informer suggest Dr. Ward’s results are anything but one. In her article, she explains the infamous “finger-cutting scene” of Heavy Rain, where Ethan Mars, the protagonist, is required to amputate his finger, the method of which is chosen by the player. Failure to complete this task results in one less clue to finding Ethan’s missing son.

Ms. Wallace explains the trauma she experienced upon completing the scene. She states that all she could think about was the pain she’d endure were she to cut off her own finger in real life, coming to the conclusion that, “It shouldn’t be so easy to watch a man slice off his own finger, especially when you’re behind the wheel.”

Ms. Wallace’s experience suggests that exposing a consumer to gore and violent situations instills the undesirable feelings associated with possibly experiencing the violence themselves. Even in situations where the player is required to inflict pain on a character other than the protagonist, notably the airport scene in Call of Duty: Modern Warfare 2, there is the option to skip the scene in-game. This is due to players decrying its disturbing nature, which is telling that gamers do not enjoy the idea of killing innocent people. Developer Infinity Ward told USA Today that the scene is meant to get players “pretty twisted up.” They go on to say that they hope the scene “makes some people a little upset.”

Infinity Ward’s hope for players’ negative reaction is likely attributed to the fact that they want players to recognize that murdering civilians is a shameful act. If Homer were alive today, would he endorse exposing that scene to people of all ages, including children, to educate them on the immoral nature and damaging consequences of committing violent crimes?

The idea that exposure to violence and undesirable situations reduces the consumer from committing them in real life is hardly exclusive to video games. Scientific American published a 2011 article stating that experts believe consumption of pornography may reduce the desire to rape by offering a safe, private outlet for deviant sexual desires. This is backed by data from Christopher J. Ferguson, professor of Psychology at Texas A&M International University. Dr. Ferguson states that rape and sexual assault are at their lowest levels since the 1960s, thanks in part to porn being nothing more than “a Google search away.” In 1992, psychiatrist Richard Green at Imperial College London found that patients requesting treatment as sex offenders commonly saw that “pornography keeps their abnormal sexuality within the confines of their imagination.”

I am by no means suggesting that Charles Manson should be released from prison if he reaches the top of the leaderboards in Call of Duty: Black Ops 2. However, the data presented does suggest we might be asking the wrong question when it comes to violence and video games.

Which do I believe is correct? I believe that being traumatized after the much more traumatic “Trial 4” scene of Heavy Rain made me a better person. I also believe that bettering myself after experiencing that mission was a conscious choice I made.

I don’t know if I am right. But I believe that a medium is only as good or bad as you decide. How do video games influence you? I believe only you know the answer to that.

[i] The Iliad: A New Prose Translation by Martin Hammond (Penguin Classics, 1988)

The Wrath of Achilles (1819), by Michel Drolling

Heavy Rain “The Lizard,” from IGN

Call of Duty: Modern Warfare 2 “No Russian,” from PC Gamer