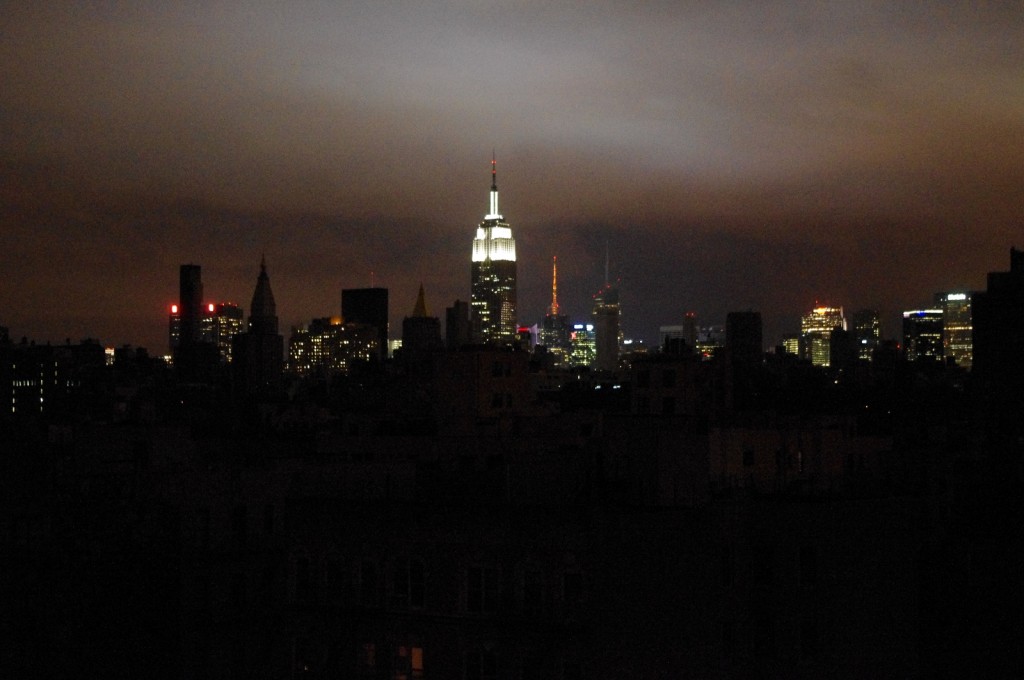 In the tech and digital entertainment industries, late October and early November traditionally mark a particularly busy time, with product launches left and right, and a major scramble to finalize plans and promotions in advance of the looming holiday season. This year, busy East Coasters were slammed with an additional challenge – Hurricane Sandy, dubbed “Frankenstorm” for its agglomeration of several storms and pre-Halloween timing. 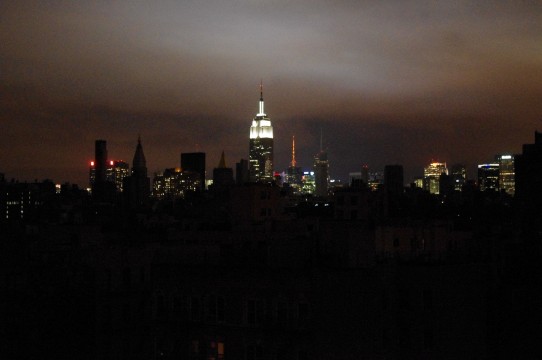 With major media coverage of the hurricane’s effects across the country, and especially New York City, it shouldn’t come as a big surprise that TriplePoint NYC, with our Silicon Alley-located office (27 West 24th St) struggled to stay connected through the blackouts and other travails caused by the unexpectedly severe storm.

But the city that never sleeps earned that moniker through the dedication of its workers, and the thousands of downtown New Yorkers affected generally found ways to stay connected. Today, with fingers crossed that we won’t have to go through this again, we’d like to share a few of our own stories on Sandy and the blackout week after the storm.

Like my other colleagues living beneath 34th St., I was without power, Internet and cell service throughout Sandy and the week after. However, I wasn’t about to let that stop me from enjoying warm showers and warm meals. That meant long, but worthwhile, morning walks up to midtown to reach powered branches of the Health & Racquet Club and Smith & Wollensky, both of which featured Wi-Fi connections. Figuring that if I could only have one hot meal a day it better be a good one, I’d eat a steak and take a few conference calls before heading over to the gym’s locker room to grab a shower. I wasn’t the only New Yorker “working from bathrobe” that week, and met a number of other execs who were staying connected at the gym – it made for some interesting conversations, and great opportunities to blow off some steam with industry folks on the basketball court.

I live on the fourth floor of an East Village walkup, avenues away from any water. While my building wasn’t damaged at all, like the rest of Downtown, we lost power Monday evening. With no timeframe for when the lights (and heat AND INTERNET) would be back, a close friend offered me her couch for as long as I needed – so I made my way up to Queens (getting there is a story in itself!). In comparison to Manhattan, Queens was warm, dry and bright. The restaurants were open and grocery stores stocked. The only problem was that my friend’s cable and Internet had been knocked out in the storm. 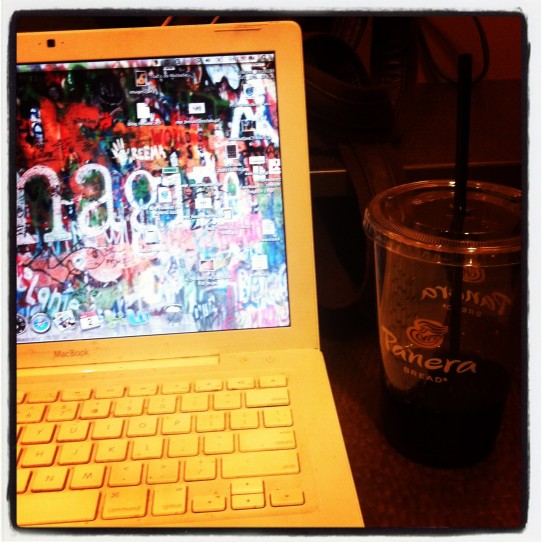 With client work on deadline and some essential international calls that needed to happen, I had to stay connected. So every morning in Queens I sought Wi-Fi (and LOTS of coffee) at a local Panera. Panera unfortunately limits Internet time (unlimited before 11, only half an hour between 11am 2pm, and unlimited again till 5pm), but, with many displaced workers all stuffed into the same shop, it wasn’t too hard to talk my way into sharing a rare hotspot.

It was amazing to see everyone band together – I will never understand the stereotype of the angry New Yorker because I only saw helping hands deliver warm food, volunteer groups cleaning up destruction and patrons flocking downtown to help bring needed money to business that were forced to close for days.

Living in midtown there was no real sense of crisis prior to the storm – for example, even at the peak of the bad weather, my roommates and I made an ill-advised trip outside to watch the floodwaters rise over the East Side Highway, hanging on to the fence at the top of a retaining wall while 80 mph gusts threatened to send us tumbling backwards. We sat around with pizza, beer and power, watching football like it was any other Sunday night. It was only the next day that Sandy’s toll came into better focus.

My friends that live downtown frequently chide me for living in a place as “un-hip” as midtown, but such banter was unsurprisingly absent as Monday morning dawned and the first of them came knocking at the door looking for a warm shower and the exceedingly rare powered outlet. As the week progressed and power below midtown remained an exotic commodity, the population of our little apartment swelled from its usual three to six at night, and even more throughout the day.

Each morning the sleeping bags and air mattresses were put away for the day, replaced by a tangled web of power strips stretched in every direction as our living room transformed into an impromptu little co-working space. It was crowded and not terribly comfortable, but in between bemoaning the lack of dual monitor productivity, terse calls with IT as VPN servers crashed and chuckling as Chris Christie rescheduled Halloween, we all grew a little closer. While it’s a bit sad that it takes a disaster to remind us to slow down and appreciate the incredible people in our lives, I think we made the best of it.

The Eye of the Beast had its sights set on every single part of New York – and living in a coastal town in Long Island, we were hit hard.  I had to be resourceful to keep up with the rest of my team and clients. With no power, I set out each day traveling a several-mile radius hunting for any open business, questing for the coveted Holy WiFi. Store entrances were sandbagged and some still have not reopened as I write this.

Spotty, intermittent cell phone service allowed me to send several updates and information about my projects to a teammate who had power and was covering my responsibilities until I could get settled. But to do even that I needed a powered cell phone and that meant charging at any outlet I could get to – at the police station and even my local favorite fried chicken joint.

Finally a week later, the cup runneth over with WiFi when the library was up and running and offering residents to charge all electronics and use their WiFi. I didn’t have access to my desktop computer, so I purchased a new, emergency laptop, headed to the library, and was back in business.  Commiserating with fellow neighbors at the library was certainly a highlight, as people also working hard there to catch up with work gathered ’round, chatted and were all more than willing to offer a helping hand (after business hours, of course!) by providing things for each other such as food, clothes or clean-up help to those that needed it.

While many of us lost power or more in the storm, a few of us remained largely unaffected aside from the need to work from home while the office’s power was down. My neighborhood (East Harlem) sustained little damage, although the gas station near me continues to have long lines and a constant police presence sitting outside as gas rationing continues. I stocked up on canned goods, bought new flashlights, filled every pot in the house with fresh water just in case, but never needed any of it.

Those of us whose power and internet remained online hosted friends who were evacuated and helped ensure that other colleagues were able to get updates out to press and clients alike.

At the end of the storm we were left feeling somewhat guilty to be so fortunate while so many others in our city were in the dark or worse. It was a huge help to have a few of us operating from powered home bases to keep connected with our NY coworkers, West coast office, and clients around the world. 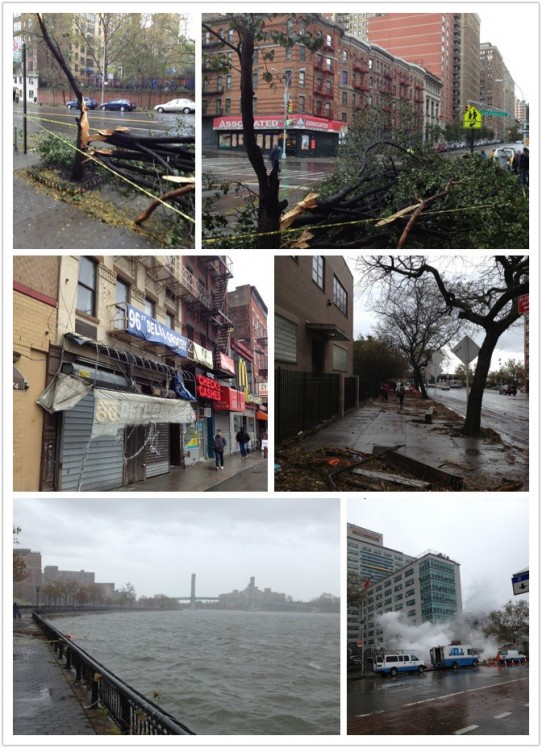