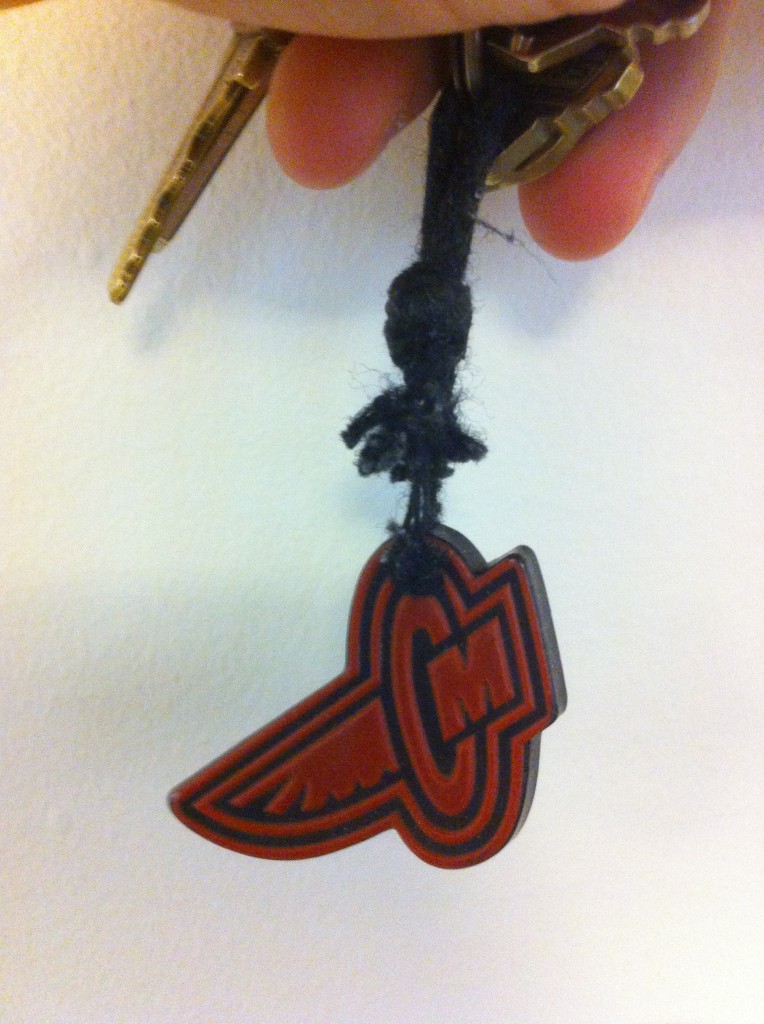 This is my Corley Motors keychain. Corley Motors is a fictional motorcycle manufacturer that the player, as gang leader Ben, must save from a hostile takeover in the classic LucasArts adventure Full Throttle.

Together with Grim Fandango and his work on the Monkey Island series and Day of the Tentacle (all also LucasArts games), Full Throttle is one of the original games that established Tim Schafer as the luminary designer he is today. It was a game with a mature story, where “mature” didn’t simply mean “guns and nudity.” It was a game whose cutting-edge CD-ROM media allowed it to have a fantastic soundtrack and amazing voice acting, including an unforgettable performance by Mark Hamill as villain Adrian Ripburger. It had clever puzzles, fantastic writing and dialogue, and an ending that dared to be bittersweet instead of gushingly triumphant. I must have played through it half a dozen times.

The cord on this keychain is frayed, held together by just a few remaining stubborn strands, ravaged by time and constant use. I have had this keychain with me for 18 years.

In 1995, thanks to good fortune and geographical convenience, I got to take a field trip with 12 of my high school friends to LucasArts, then located north of San Rafael across the bay from its current San Francisco offices. I still remember walking in and seeing the massive picture of Full Throttle’s Ben behind the front desk (Full Throttle having been the company’s most recent major release), and gaping in wonder at the broad array of Lucas paraphernalia and gear on display around every corner. On one wall, backdrops and concept art from Sam & Max cartoonist Steve Purcell. In the corner, a full-sized X-wing cockpit set in front of a green-screen, used to film the cutscenes for Rebel Assault II.

I’d been a gamer all my life, but this was my first visit to the inside of a game studio, and I was awestruck. I was too young and unfamiliar with the industry to appreciate who I was meeting and what I was seeing, but I knew the culture there was something I wanted to be a part of. On the way out, each member of the tour was given a Corley Motors keychain as a souvenir. In hindsight, I think I can pinpoint that tour as the day I started giving serious, non-daydreaming thought to working with games, one way or another.

Four months ago, Tim Schafer was the host of Ümloud in San Francisco, where I joined a group on stage to play Rock Band for charity. As the party was winding down, several fans had the chance to share a brief chat with Schafer and have their picture taken with the now-legendary game creator. When my turn came, I produced my tattered keychain, at my side where it’s always been, and briefly thanked him for being an inspiration so long ago. Tim’s eyes lit up in surprise when he saw the trinket. “Where did you get this? They only ever made a handful — even I only got a couple of them.” I explained its origin, and its significance to me — and Tim took my picture with it.

Today, Disney — the new owners of LucasArts after Lucas’ own sale of his properties — announced they were shutting down LucasArts completely. The licenses will still be out there, and there may be new games under the Lucas label, but the studio is gone for good. There will no longer be a place where people come and work on creative new ideas, in a sea of Star Wars art and classic gaming souvenirs and call themselves LucasArts.

I am sure, as is true of the studio’s original stars like Schafer, Gilbert, Grossman, and others, that all of the people losing their jobs today will find new chances to create, and go on to build magnificent things that will stand the test of time. To all of them, though, to anyone who ever worked for LucasArts — thank you, from all of us who ever wished we could do the same. I’ll carry this piece of your legacy in my pocket and in my memory.