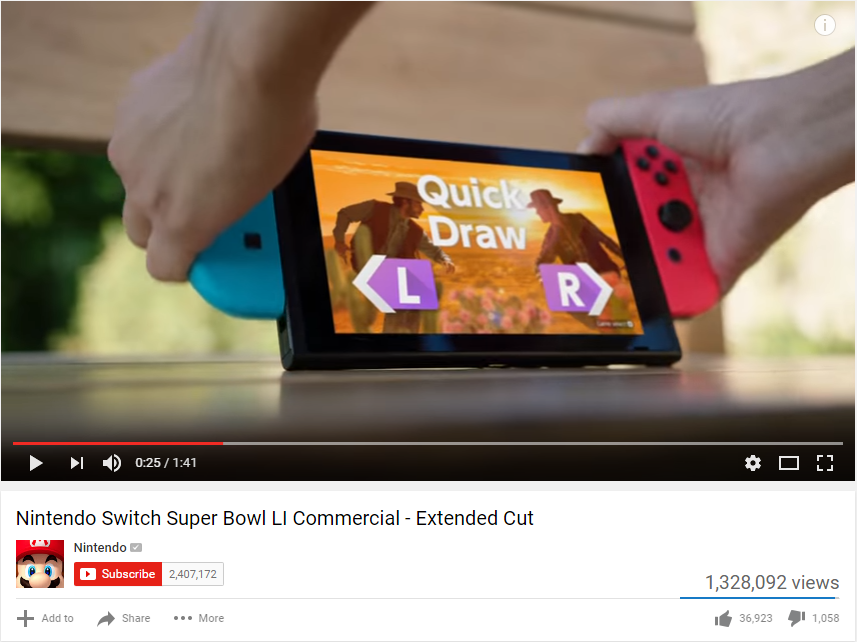 This Valentine’s month brings us nothing but love… for Nintendo! (okay, and maybe a bit of controversy)

This week’s TPoI include: Nintendo’s potential VR plans, a Switch Super Bowl commercial, a big fat lawsuit for Oculus, and Nintendo’s Fire Emblem is a gacha!

Nintendo’s Fire Emblem introduces controversial Japanese concept of “gacha”
Nintendo’s first free mobile game, Fire Emblem, is making waves this week as players are lured into purchasing special in-game items in a gambling-like fashion, employing a tactic the company has previously avoided – “gacha”. Bloomberg notes that after Super Mario Run launched on iOS priced at a premium $10 and without in-app monetization, the gacha mechanics in Fire Emblem are problematic, saying, “the Japanese powerhouse is taking a different approach that is potentially more lucrative — and much more controversial.” More information can be found on Inverse.

Nintendo plans to add VR to Switch
Nintendo president Tatsumi Kimishima reportedly discussed potential virtual reality plans for Switch in a conversation relayed by Kantan Games, a Tokyo-based consultancy firm. The company has previously shied away from sharing any VR plans, citing concerns around common VR issues and side effects like nausea or headaches. However, patents emerged in December regarding the design of a VR accessory to be used with Switch. Little is known about the service, but GamesIndustry reported that it will be a monthly and/or yearly service priced between $17.70 and $26.50 and including with a free NES or SNES game every month.

Nintendo Switch-ing it up with first Super Bowl ad
Nintendo’s first-ever Super Bowl ad will feature the Switch, and at $5 million per 30 seconds of airtime, the company is showing how serious they are about the new console. Excitement about the Switch and its fourth quarter slot has been voiced by outlets like The Verge, Polygon, and Engadget. Nintendo’s YouTube channel provides an extended commercial that has broad appeal -speaking to hardcore gamers, families, and everyone in between, mimicking TPCi’s approach last year in revealing a longer commercial before the actual Super Bowl ad aired. The two minute ad features many Switch game previews, as well as hints at the availability of household names like Super Mario, Street Fighter, and Mario Kart. The extended cut can be found here.

ZeniMax lawsuit seeks injunction to temporarily halt sale of Oculus headsets
The years-long lawsuit of Maryland-based game developer ZeniMax and VR leader Oculus has come to a close – with ZeniMax being awarded $500 million on February 2nd, for Oculus co-founder Palmer Luckey’s violation of an NDA. After the “win”, ZeniMax reportedly told Polygon that the company was deciding whether or not to file an injunction – which would temporarily stop the sale of Oculus Rift headsets.