It takes a special breed of influence (and persuasion) to inspire others to WANT something (on their own, for themselves) from within.

One of the first metaphors – and one of the first PR lessons – I remember was at age 12 when my mom explained how and why I needed to “plant the seed” with my dad about getting a puppy. I did… 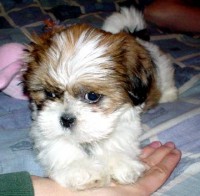 Mere weeks later, we got a puppy.

“Planting the seed” is more than just a handy, widely-applicable analogy. It is the heart and soul of persuasion and the foundation of great public relations.

When done correctly, it makes everyone a winner.

The thing is – when you feel passionately about something, it’s hard to fathom any approach (to management or persuasion in general) that doesn’t involve stating your case. Why does it matter so much? When you care, it seems like other people should feel naturally compelled to act. It would be crazy not to be as passionate as you.

If your case is truly worthwhile, this is a valid thought process.

“PLANTING THE SEED” IS THE HEART OF PERSUASION AND THE FOUNDATION OF GREAT PR.

Sidenote: If you question whether or not my puppy quest was worthwhile, I urge you to Google “child with puppy” and tell me that’s not the happiest collection of photographs you’ve seen all year.

Whether it’s convincing your dad to get a puppy or convincing a reporter to write about your tech start-up, effective persuasion involves patience – lots of it. (On top of a compelling argument and the strategy, diplomacy and determination needed to communicate it.)

Chances are, the first time you suggest something, people WON’T be compelled to act. Don’t be discouraged. It doesn’t mean they aren’t listening.

The best kind of influence happens weeks or months later, when your message sinks in and people start “stealing” your ideas as their own. If the end result is what you aimed to accomplish, this is (humbling, but) effective.

And if accomplishing your goal isn’t satisfying enough, take comfort in this – as long as you’ve voiced yourself loudly and clearly enough, it doesn’t go unnoticed that you were the seed planter. It doesn’t take long before people take you very seriously.

It’s usually not until you’ve successfully influenced someone that you realize a seed was ever planted. In fact, the only main difference between my puppy story and day-to-day PR is that in this case, I was consciously aware of planting the seed.

It’s easy to take process for granted when you’re going through the motions. It’s also easy to get discouraged and feel helpless when you’re at the mercy of someone else. But when you practice persuasion objectively, you start to recognize the many times you can’t strong-arm your way through. Perhaps the world’s longest flowchart would be helpful in illustrating real-world application?

You simply can’t expect others to accept your idea as fact right away every time. And that’s not a bad thing. If you’re thinking three steps ahead of everyone else, then it only makes sense they’ll need some time to catch up. And if you’re not forward thinking, you’re going to have trouble influencing people, approach notwithstanding.

How does a 12-year-old seeking puppy compare to a tech startup CEO trying to get coverage for his company? Check out this step-by-step breakdown of persuasion gone right: 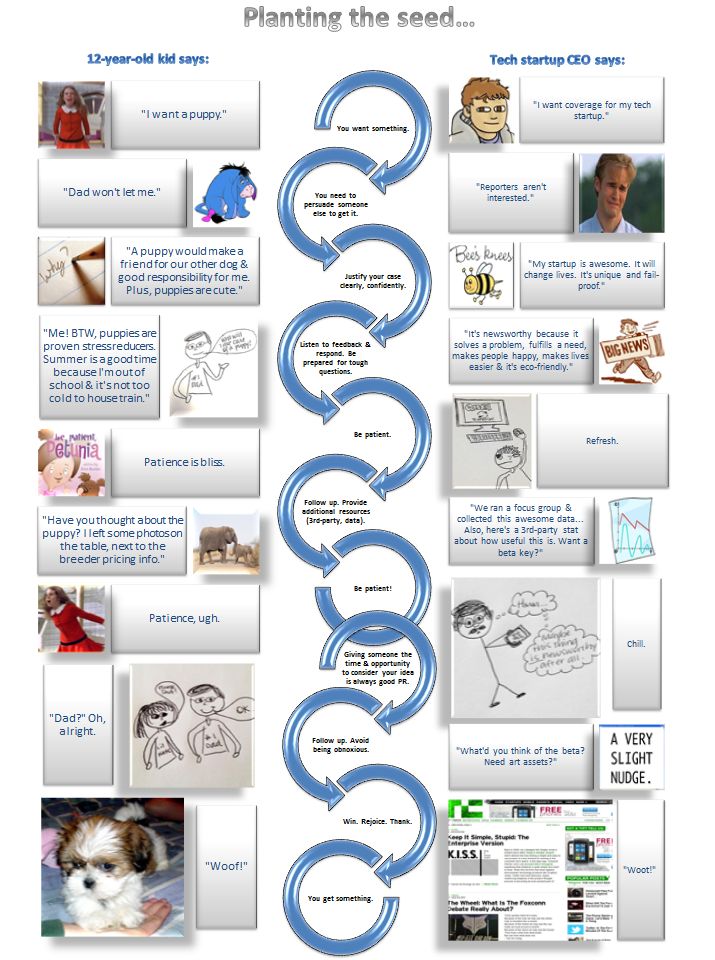